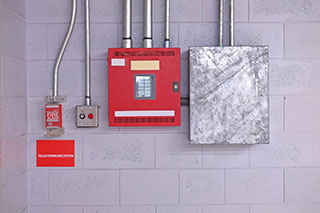 Over the years, fire alarm systems have saved countless lives in addition to protecting billions of dollars of property, equipment, and businesses of all types. High quality alarm systems have evolved to make use of sophisticated sensors, notification devices, and communication systems. They can now accurately detect fire conditions, interface with related systems such as fire doors, and alert not only building occupants, but also management, remote locations, monitoring companies, and nearby public authorities.

As important as they are, fire alarm systems are sensitive electronic equipment, and subject to damage from electrical surges.  These surges can enter from power supply lines, signaling line circuits, initiating device circuits, outdoor antenna connections, and notification device circuits – in fact, any electrical path that has the potential to find its way into the FACP.

To shield these valuable systems, surge protective devices (SPDs) should be installed on every potential pathway to ensure they are guarded from damaging surge events. Today, a wide range of SPDs are available to match the needs of any installation. Once installed, they protect the connected system from large, externally generated surge events, as well as smaller, daily surge events that are generated by machinery startups, welding, HVAC systems, and many other common internal and nearby external sources. In the course of doing their job, however, SPDs will eventually sacrifice themselves, and no longer provide protection. They may have absorbed a large surge, or many small ones that caused the unit to degrade over time. Either way, that expensive and sensitive fire alarm system is now fully exposed to power surges.

What’s worse, not only could the fire alarm system itself now be destroyed by a single nearby lightning strike, but the protective function of the fire alarm system is also jeopardized. If it stops working, the potential for harm is greatly multiplied – and so is the potential for financial consequences due to fines or the requirement to keep fire responders on-premises until the system is fully restored.

Many SPDs have some kind of indicator, usually LEDs, that change from green to red or flash when the SPD has reached the end of its life. Still, this may not solve the problem. How often can management send someone around to every closet and equipment room to check every single surge protector? The moment that person turns away from the SPD, an unnoticed small surge could end the life of the device, leaving the system fully at risk.

The best way to solve this problem is by using an SPD with an audible alarm. When the unit stops functioning, it should alert the user – loudly – that it’s time for a replacement. This virtually eliminates the problem of an SPD becoming non-functional without the user realizing it. Ideally, the unit should also alert the user via a flashing red LED light for visual confirmation, and offer dry contacts for connectivity to the alarm panel and direct notifications to management.

Learn more about how DITEK can help provide peace of mind for the fire alarm industry while providing the best surge protection the industry has to offer. Contact us today!