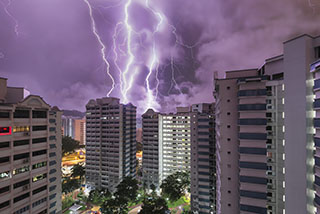 For residential property managers, there are only a few vital factors: rent to quiet, reliable tenants, collect the rent on time, and control expenses – particularly large, unexpected expenses. One large, unexpected expense that has caught many property managers off guard is the result of an electrical surge event, and the subsequent need to not only replace the fire alarm panel (the panel and wire may be covered by insurance, but the replacement labor often isn’t), but to also pay for a costly fire watch until the parts can be procured, installed, and re-inspected by fire marshals.

A typical bolt of lightning can contain millions of volts and hundreds of thousands of amps. This is easily enough to cause electrical damage not only in direct strikes to buildings, but also over extensive distances when carried by electrical supply lines. In areas where lightning strikes are common – Florida, for example, with almost 1.5 million strikes per year – lightning protection is generally more common than other areas. However, lightning is not the only cause of electrical surges. Other common causes include switching at electrical distribution substations, welding and other intense electrical uses, and the startup of large electrical motors such as those in HVAC systems, factories and material handling operations. All homes and facilities with sensitive electronic equipment near any of these potential surge sources should install surge protection to prevent damage to critical electrical systems and devices.

Individual homeowners or office workers can take simple steps to reduce the risk of damage from power surges, such as unplugging sensitive equipment. However, this is not always practical because many systems are required to remain powered at all times, such as fire protection systems, access control, video surveillance and more. These “mission-critical” devices are powered via electrical wiring in virtually every business and residential facility. A single large power surge, or the cumulative effect of many smaller surges, can destroy individual devices or greatly reduce their service life.

Surge Protective Devices (SPD) are specifically designed to limit the voltage supplied to an electrical device by either blocking or by shorting to ground damaging overvoltage that is above a specified threshold. SPDs are an extremely cost-effective preventive measure in comparison to repairing or replacing expensive devices that are critical to daily operations.

For real estate management companies around the country, SPDs should be an important preventative tool. Facility managers in the property management space are sometimes aware of the dangers of lightning strikes and the damages they can cause – but not always. Quite a few property managers in recent years have had to replace their unprotected fire panels more than once – with some of them in Florida, for example, seeing a higher frequency of equipment replacement within a year – due to lightning damage.

Depending on local regulations and requirements, residential facilities without functional fire alarm systems may have to stage a “fire watch” to protect residents and stay in compliance with local fire codes. In some jurisdictions this can require that an actual fire truck and firefighters be stationed at the property 24/7 until the fire alarm system is repaired. The cost of a fire watch is in addition to, and can be much larger than, the cost of the equipment and labor required to replace damaged fire panels and wiring. An SPD on the fire panel can easily and cost-effectively alleviate such incidents and expenses, for a small percentage of the repair or replacement cost of the fire alarm system.

DITEK offers a full range of SPDs designed for these purposes, with a range of functions from basic protection up to models that allow for remote monitoring, so that managers can check the status of their various install locations from their headquarters.

While a small number of property managers might think that surge protection is an added expense without any ROI, many more are well aware of the benefits – and safeguard their income with surge protection.  View our Application Guide for more information on what to protect.

More posts from author
Monday, 17 October 2022 Getting Started with Surge Protection
Friday, 21 January 2022 How to Protect Electronics from an Aging Power Grid
Friday, 21 May 2021 Protect PoE Devices from Power Surges and Other Disruptions