By their nature, campus settings in Universities, private schools, and colleges can be spread across large areas, with multiple academic buildings, residences, recreational facilities, and parking lots, all connected by pedestrian walkways and other open spaces.  For this reason, providing security and emergency systems in campus settings usually involves a combination of elements. There are those designed for use in buildings, such as access control, and those designed for exterior areas, such as lighting controls, video surveillance, and emergency call boxes. 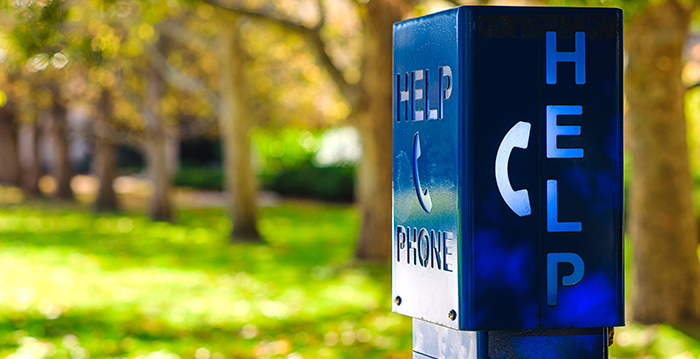 This exterior equipment is normally exposed to the elements, and to potential damage by direct and nearby lightning strikes, downed power lines, and a range of possible electrical malfunctions brought about by the actions of wind, rain, and environmental degradation.

Example: A large University in Georgia installed surge protection inside their buildings to protect network equipment. However, they failed to provide protection at emergency call boxes that were installed throughout the parking lots and foot paths on campus. These call boxes were powered using PoE (Power over Ethernet) so facility management believed they were safe from damaging power surges. Unfortunately, they were not protected from external electrical surge sources. A few days before fall orientation for new students and parents, a lightning strike on the campus created a power surge that was carried by the networked cabling to all the other connected areas on the network. As a result, over 75% of their emergency call boxes with cameras were destroyed. Embarrassed by the number of inoperable emergency boxes, the school covered them with trash bags; and had quite a bit of explaining to do to the concerned parents during orientation.

DITEK best practices include surge protection at both ends of all connected network equipment, as the network cabling provides a conduction path for electrical power surges. This should be an obvious concern in areas with high levels of lightning activity, particularly for network cabling paths that run to exterior areas for emergency call boxes, video surveillance cameras, lighting controls, or any other networked electronics or sensors.

Even in areas with little or no lightning activity, exterior electronic equipment is vulnerable to the effects of wind and rain. Any device that is powered has the potential to create an electrical fault or short circuit that can transmit damaging power surges to the network cabling. The DITEK recommendation to protect both ends of the network cabling applies to all situations where important security and life safety systems are installed.

Applicable products for these uses include rackmount surge protectors for interior network rooms, as well as single channel protectors for use at the remote networked equipment. There are even special models that are built for connections exposed to extreme weather conditions. Surge protectors for networked cabling are designed to minimize signal losses while passing high-speed digital network traffic. With a modular design, they are easy to replace when needed.

There are also surge protection devices designed specifically for cellular transmitters, bi-directional amplifiers (BDA) and distributed antenna systems (DAS) that are used to ensure public safety radio systems will have sufficient coverage in an emergency situation.

Contact DITEK today to help you make sure your essential safety and security systems are protected!