Protect PoE Devices from Power Surges and Other Disruptions 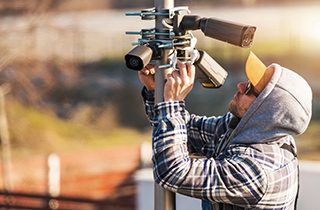 Power over Ethernet (PoE) has made installing equipment in remote locations convenient and affordable. One single Ethernet cable can deliver both DC power and data to low power PoE-enabled equipment, including IP security cameras, network access points and switches, and building access controls.

PoE was originally developed for IP phone systems and delivered only 7W of power. Over time, the technology has improved and can now accommodate up to 90 watts / 57 volts. PoE eliminates the need for additional (and more dangerous) A/C power wire runs to end-point devices.

While most Ethernet cable is relegated for indoor use, more and more outdoor systems are utilizing PoE due to its ease of installation and operation. The downside is this exposes PoE devices to the risk of power surges or spikes caused by weather conditions, including lightning strikes and other disruptions.

The cost of lightning strikes is rising

While lightning isn't the most common source of power surges, a nearby strike can certainly pack a punch and risk destroying the internal circuitry of end-point PoE equipment. Lightning strikes are still a threat in the United States, especially in the Midwest and Eastern Seaboard. According to the Insurance Information Institute, while the number of insurance claims in the U.S. involving lightning strikes dropped between 2017 and 2019, the total amount insurance companies paid for claims increased by 11 percent, totaling $920M in 2019.

How to protect PoE equipment from power surges

Because a power surge can travel in any direction along Ethernet cable, a surge protective device (SPD) is the best way to protect outdoor PoE equipment. An electric shock only happens if there is a complete path between two contact points. The current needs a place to enter and exit. An SPD intercepts the excess electricity and diverts it safely via a grounding wire. The electricity always follows the path of least resistance to the ground.

Where to install Ethernet surge protectors

DITEK has multiple SPD designs available to match nearly any application. Be sure to consider weather conditions when developing a surge protection strategy. SPDs need to not only withstand potential electrical surges, but also hold up against the elements, including rain, dust, snow, ice, and humidity.

Regardless of where an electrical surge originates, SPDs are an extremely affordable way to isolate electrical surges and prevent them from reaching PoE devices or switches.

DITEK designs and manufactures SPDs that perform at the highest levels. Providing cost-effective solutions for protecting valuable PoE-enabled equipment. Contact us for more details about developing a surge protection plan.

Tweet
How to Calculate ROI for Surge Protection
DITEK Promotes Wendy Gattis to Chief Executive Off...