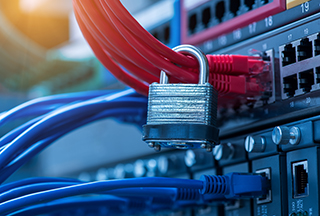 Many electronic systems are in service today to improve our lives – some by protecting our safety (fire alarm systems, for example), some by facilitating transactions (such as point of sale devices, ATMs and fuel pumps), and some by providing security (including access control and video surveillance), among many others.  All of these systems have numerous factors in common. First, they all incorporate sensitive electronic processors and components that could potentially be damaged by over-voltages. Secondly, they all have cable connections between components and/or other electronic infrastructure. This makes them all vulnerable to damage – not only from electrical surges that enter from outside your building, but also those that come from within. While most savvy integrators and installers are aware that cost-effective surge protection devices are available, surge protectors are not always installed according to current best practices. One prime example of this is the failure to protect both ends of a cable or wire run.

Planning and specifying surge protection for a system should begin with the incoming power connections because this is the primary entry point for power surges and spikes that originate outside the facility. Protecting the power connection also provides protection from internally generated power anomalies resulting from welding, air handling equipment and similar large power devices.

Surge Protection – Not Just for Power

While protecting the input power is necessary to protect the system, it is not sufficient. There are other electrical pathways into the system that can expose it to potentially damaging power surges.

These would encompass any electrical connections that pass outdoors. Examples of this situation include wired connections to outdoor surveillance cameras, signaling line circuits in fire alarm systems, and telephone lines that are connected to fire alarm panels, ATMs, and point of sale devices to enable communication and notification. Because they are electrical conductors that pass outside the facility, they are vulnerable to outdoor electrical disturbances – including accidental contact with power lines, or induced currents from lightning strikes that could be miles away. Any such power surges on these cables can be passed into the electronic system and cause damage.

The other type of potential pathway is a wired connection to other indoor devices and system elements. In particular, powered devices such as network switches, audible notification alarms, and visual emergency signals (e.g. horns, buzzers, flashing lights) have the potential of making accidental contact between high voltage power and communication cabling. Other connections, particularly longer cable runs, are vulnerable to induced power surges from nearby cables that can create damaging voltages without ever making actual physical contact with surge sources.

The Solution is Simple: Protect Both Ends

The best way to isolate any electrical surge problem, and prevent it from migrating to other devices or locations in the facility, is to install surge protectors at both ends of the cable or wire run in addition to the input power for each system.

Why both ends? The answer is because exposed conductors become the path of surge energy that can damage equipment at each end of that conductor when left unprotected.

So, for example, a surveillance system with a camera located outside the building on a pole should have a surge protector at the camera end to protect the camera, and a surge protector at the other end of the cable before the video recorder to protect the rest of the system. Likewise, any connection at a communication device such as an ATM or POS system should have a surge protector where the phone cabling connects to the system to protect against surges entering the system from those phone lines – because they go outside, where they can be subject to electrical surge sources. Additionally, all of these systems should be protected from incoming power surges at their power supply connections as well.

As more and more services move to the cloud and devices join the network, the risk of damaging surges migrating to other parts of a facility has also increased. When all devices are networked across systems, a surge could move from a surveillance camera, for example, through a digital network to a device on another system. Putting surge protection in place at both ends of these connections, and especially at locations where the network moves from outside the facility to the inside, can help prevent surges from spreading across a network and damaging or destroying multiple devices and systems.

Learn more about how DITEK can help provide peace of mind along with the best surge protection the industry has to offer. Contact us today!